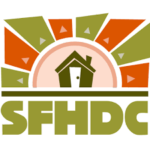 The mission of SFHDC is to foster financial stability through the development of affordable housing, the facilitation of homeownership, and the economic empowerment and revitalization of Bayview Hunters Point and other neighborhoods of Southeast San Francisco.

The community of Bayview Hunters Point lags behind San Francisco at large. Economically depressed, the central streets are lined with vacant and blighted storefronts. Thousands of residents in the 94124 zip code (Bayview Hunters Point) live in poverty, totaling over 15% of the population. Numbers are even more staggering regarding the minority communities: 39% of African-Americans, 16% of Asian Americans, and 19% of Latinos live in poverty (U.S. Census Bureau). Residents in the neighborhood have seen generation after generation move away due to escalating housing costs and a lack of goods and services nearby. As a part of our comprehensive revitalization strategy, SFHDC uses financial education services to empower residents to use their money wisely. Education and encouraging smart financial behaviors to ensure improved lives, wealth building, and retention for our clients.